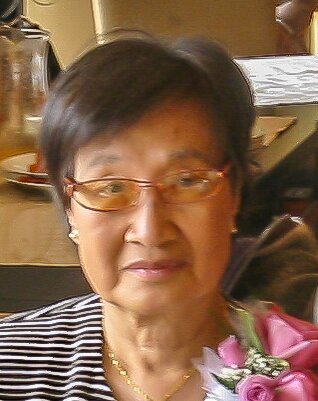 Please share a memory of Chi Ming to include in a keepsake book for family and friends.
View Tribute Book
1927- 2022 Chiming Ho 何智明 (AKA 何慧錚）was born in Fo Shan 佛山, Guangdong Province in 1927. Her father Ho Geoi Ho 何居可 was a Chinese merchant in Cuba running a family grocery store in Cienfuegos. Her mother Chan Juk Waa 陳玉華 raised her in China alone until her father returned to China when she was ten. She was an only child but grew up in the company of close-knit network of cousins. Chiming was a strong woman at a young age. She fought for the opportunity for education and followed her cousin to go north to school perhaps against her mother’s will. She later often recounted those days: shivering with malaria isolated at school; her cousin and her uncle carrying bags of salt and rice, crossing mountains to rescue her as the war began to break out. With the Japanese invasion, Chiming fled to Hong Kong with her family. After the war, she met and fell in love with the famed novelist Chan Chi Chun 陳子雋, pen named 俊人. They were married and had two children How-Ching Fernadina Chan and Hau Cheong Fred Chan. Chiming devoted much of her life to bringing her children up in a thoroughly modern way, enriching their lives at a young age with all kinds of experiences: swimming in the ocean, piano lessons, or dancing at the nightclub. She supported their pursuit of education. She was also a strong supporter of her husband throughout his illustrious career as a journalist and writer. In 1974, she suffered the greatest tragedy of her life. Her beloved son Fred died of cancer at age 24 after a 4-year battle. She had quit her job at the bank in Hong Kong and flew alone to North Carolina to take care of Fred in his last months. She watched how he suffered and took his last gasp of air. With a broken heart, she brought his ashes home to Hong Kong. Her husband who evolved into a columnist writing social and political comments under the pen name Man Yan Git 萬人傑 wrote and published a book as a memorial to Fred. This book was later made into a movie with Lisa Lu 盧燕 playing Chiming’s character. After Chi Chun suffered two strokes, they immigrated to Boston in 1984 to be close to their daughter. Chi Chun continued to write for the Boston page of Sing Tao Daily and connecting with Man Yan Association 萬人協會. Chiming was the caregiver, as well as the driver that delivered the articles. After Chi Chun passed away in 1998, Chiming organized a foundation with Chi Chun’s colleague to give rewards to journalists that represent the voice of the people. Chiming had lived in the 2Life Communities (formerly known as JCHE) for over three decades. She was a very active member of the community, doing volunteer work, and participating in events like Seder during Passover, Thanksgiving, and Chinese New Year celebrations. She loved to travel and had been to all corners of the world until she started to slow down in her late 80s. Chiming was feisty and full of life. She was always able to bounce back from illness. COVID gave her the last blow. She passed away peacefully Thursday, February 17, 2022, at 11:45 pm at St. Elizabeth Hospital. She was survived by her daughter How-Ching Fernadina Chan and son- in-law Dr. Albert Yao Chee Wong of Brookline, and god granddaughter Charisse Kwan of London, Ontario. Traditional Chinese Service will be held at Wing Fook Funeral Home on Wednesday, February 23. In lieu of flowers, you can donate to Duke University Cancer Institute in memory of Chiming Ho & Fred Hau Cheong Chan.
To send flowers to the family or plant a tree in memory of Chi Ming Chan, please visit Tribute Store
Wednesday
23
February

Look inside to read what others have shared
Family and friends are coming together online to create a special keepsake. Every memory left on the online obituary will be automatically included in this book.
View Tribute Book
Share Your Memory of
Chi Ming
Upload Your Memory View All Memories
Be the first to upload a memory!
Share A Memory
Send Flowers
Plant a Tree